What is a Track System?

Photolithography is a well understood process that has been used since the industry was established. The process is similar to that used in photography - hence the name. The process is a method of patterning silicon wafers to allow selective removal or addition of material to specific areas on the wafers determined by their design. 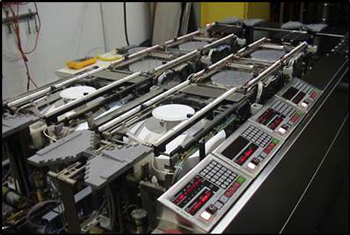 A "track" sequentially processes semiconductor wafers for coating or developing of the photo sensitive layer either before or after exposure . The "track" system is series of process modules to allow sequential processes to be carried out automatically on the wafer. These processes normally focus on the coating of the wafers with the photosensitive materials or removal of the desired area in the development stage. Tracks can be configured for coating and developing, or just one of the processes depending on the customer need, throughput requirements and factory layout.

The "coater" module, dispenses a photosensitive liquid (normally called photoresist or resist) and then then spins the wafer creating a uniform layer as the wafer is spun. The thickness of the layer is controlled by factors such as acceleration (ramp) spin speed, time and viscosity of the photoresist material. Similar modules are used for "Spin on Glass - SOG processes) which tend to use more viscous materials. Pumps to dispense the liquids are chosen mainly determined by the viscosity of the material to be used. 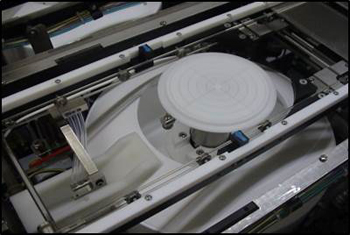 Depending on the materials being used and the layer to be coated on the wafer, an adhesion promoter may be needed which requires an additional module. Normally HMDS (Hexamethyldisilazane) is deposited in a small vacuum chamber rather than spinning to ensure a thin conformal layer.

Once the wafer is coated with resist the wafer then travels to a bake station to drive off (evaporate) any solvents from the resist material. The wafer is then placed in an exposure tool (either manually or automatically).

The exposed wafer is developed by dispensing liquid chemical on a developer track.

Due to the lower viscosity of developer chemicals this is often via a pressurised canister rather than pumps. 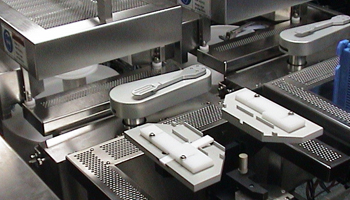 A track system can also contain a cleaning unit which is normally a high pressure water jet or a variety of brushes made from various designs and materials. Placing a wafer cassette full of wafers and running them through cleaning process gives a simple and effective solutions in the production environment to remove any debris from previous process steps.

Configuration can be quite difficult so we provide on-site meetings for design and work with you every step of the way.

Tool selection for material dispense and removal criteria is usually based on:

Whatever your need we can provide you a system to suit. Just about every system is customised to your needs. From spinners and hotplates that fit into a wet bench to fully robotic track systems running multiple processes we can help. 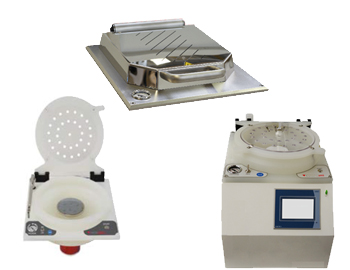 Ideal for laboratory use or for putting into wet benches

Extend the lifetime of your legacy SVG equipment - arrange an audit visit...

In addition to being able to supply you totally remanufactured warranted systems, configured to your needs, we can provide service and support on your installed base - often at a fraction of the cost of other companies.