What is a Prober?

At any point in the wafer manufacturing process devices can be "probed" to determine electrical performance at that time in the process and compared against expected results to determine if the device is performing according to specification. There are different tests performed depending on what part of the process the wafer is at. Most probing utilises very fine pins or needles to make electical contact.

Once the wafer is fully processed the wafers normally pass to the Wafer Probe/Electrical Test department that performs functionality testing on the devices. 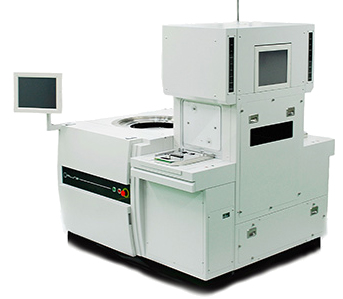 Automatic probers can be thought of as highly accurate positioning machines that move and align each device (or a group of devices in Multi Die probing) under a probe card (a series of needles or pins). The probe needless are used to make electrical contact to each device allowing a "test" system send and receive electrical signals, simulating the device in real world operation, to see how it will perform.

In most probers, the probe card is held statically and the wafer is moved on a chuck then raised to make electrical contact with the probe needles.

Each devices "electrical result" is logged and "binned" according to performance and a set of criteria. "Binning" can be considered categorising electrical performance of each chip and can have an impact on ultimate sale price of that chip. Wafer Mapping Inking and Sorting The position of the die and bin code is used to create a wafer map, so when the devices are picked off the wafer for mounting and packaging only the acceptable ones are chosen i.e. the ones of known good performance. Bad or non performing chips are left behind. Packaging is pften carried out at assembley houses who receive the wafers in and need to know what chips work on what wafer At the die picking stage there are 2 technologies for identifying good and bad die: 1: Elelctronic Wafer Map 2: Ined Die Some older die picking tools looked . Semi- Auto Probers are where the stepping between positions is automatic but the wafers are loaded manually.

Manual probers often use Micromanipulators where the wafers remain static and the probes are moved into position with the help of very accurate screws or even piezo electric materials.